David Coppock (5-string banjo and vocals), despite a love of folk music going back to his youth, never expected to become a folk and bluegrass musician when he was singing in choirs and playing viola.   But after inheriting his instrument in 2014 he was quickly immersed in Scruggs-style bluegrass banjo playing.  David has been a Crawdads fan since his father Ray helped found the group and was delighted to join in 2019.

David was raised in Davis, California but spent his adult life in the east, where he raised his children Julia and Andy.  David was an economist and data scientist, working in New Jersey and New York City.  With his wife Julia, he retired and moved back to Davis in 2018. 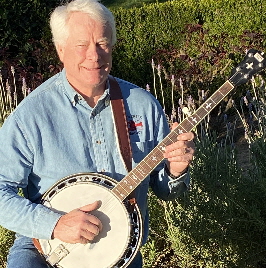