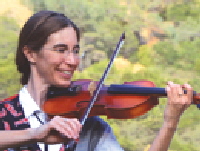 Kate Laddish (fiddle, guitar and vocals) joined the Putah Creek Crawdads as the result of a fortuitous mistake: A mutual friend told one of the “original four” Crawdads that she played fiddle, and they asked her to join them for a gig or two. The one catch, however, was that Kate did not actually play fiddle at the time. When trying to explain that she played mostly guitar, Marc countered with, “Well, you HAVE a fiddle, right?”. As a result of this exchange, the instrument that heretofore had been Kate’s violin (with which she hadn’t had lesson since age 13) became rechristened a “fiddle” and Kate embarked on the adventure of being a Crawdad.

Within the band, Kate enjoys exploring the harmony and rhythm roles available for the fiddle as well as the more obvious chances to step out front with an instrumental lead. Every now and then, when she doesn’t have the fiddle under her chin, Kate has fun singing lead and harmony vocals as well.

Raised in Berkeley (seasoned with large amounts of time in the very small town of Sheep Ranch, California), Kate is a former college geology instructor who also enjoys composing music, writing (both lyrics and more expository pieces), doing stage lighting at The Palms Playhouse in her adopted hometown of Winters and spending as much time outdoors as possible.